Wales’ Deputy Minister for Climate Change has told companies seeing to buy Welsh farms for carbon offsetting to “hold their horses” and “behave properly” as without meeting the Welsh Government’s conditions they wouldn’t be allowed to plant trees on them.

Lee Waters was responding to concerns by the National Framing Union in Wales and campaigners that rural farming communities in Wales could be “decimated” if plans for blanket afforestation go ahead.

This month 17,000 people signed a petition against plans for the planting of trees on Frongoch farm in Cwrt-y-Cadno by a company based in the Shard in London.

Speaking on Radio Wales’ Sunday Supplement, Lee Waters said that there was a “legitimate concern” about companies buying Welsh land that the Welsh Government “need to head off”.

“I would say to the Savills of this world who are cold calling – hold your horses,” he said. “Because you may well try and sell this land to a speculative investor but in order to plant trees on it you, first of all, need an environmental impact assessment. So there’s no guarantee that land will be suitable for tree planting.

“You need to properly consult, you need to change your plans based on what the community want, you need to ensure the mix of trees is right for that location. And if you don’t satisfy those conditions, you won’t be getting any money.

“So calm down, behave properly, and make sure you work with us because what we want is Welsh farmers leading the way here, Welsh landowners planting the trees, and controlling ownership remaining locally.

“This is capitalism – people are trying to make a quick buck. I’m not interested in that game. I’m trying to tackle climate change in a way that keeps wealth and control locally.

“It’s clear that some people are getting ahead of themselves and I’m here to give them a clear message, as my grandmother would say, watch your eyebrows.”

Sunday Supplement presenter Vaughan Roderick had asked whether people were right to feel that Wales was now being bought up, due to the buying of farms for carbon offsetting, and soaring house prices.

“There is a question of ownership, isn’t there?” Vaughan Roderick asked. “If we go back 120 years the question of land ownership was a huge political issue in Wales. And those big estates were broken up, you know?

“And it seems to me that there’s a feeling in Wales that Wales is being bought out from under us. And it’s not even from families whose names we know like the Windsor-Clives and the William Wynnes.

“It’s anonymous corporate entities and no one is quite sure who owns them, and that they are buying Wales out from under us.”

He later added: “There is a feeling, and it’s not just about this, it’s what’s happening with Airbnb, with holiday homes, that Wales is being bought out from under the communities that live here at the moment. ”

Lee Waters agreed that there was a feeling of “anxiety” that had a number of causes, but that tree planting had become a “convenient pantomime villain”.

“We need to separate out fears from facts. There’s a legitimate concern and a real potential for danger, and we need to head it off.

“The evidence we have so far of the number of farms being bought up and the grants being applied is very, very small. And of those applying for grants you are including people like the Woodland trust for example.

“So there’s very little evidence of it happening yet, but that’s not to say it couldn’t happen, and we want to guard against it happening.

“And it would be better if the people who are sounding these alarms worked with us to manage the change instead of railing against the change.”

Presenter Vaughan Roderick also asked whether trees were being planted in Wales “so that executives can zip around the world in corporate jets”.

Lee Waters answered: “We definitely don’t want greenwashing. And we want to do this in a way that works with communities to bring multiple benefits and that brings jobs.

“For example, 80% of the timber we use in this country, we import. And only 4% of the trees we grow here in Wales we use to build Welsh homes. The rest goes for pallets and garden fences.

“Now there’s a real missed economic opportunity here given the demand for timber is going to increase by something like 120% in the next few years. So here’s a chance for us to create a green supply chain in Wales with skills, Welsh grown wood, Welsh produced products, swooping out carbon but also creating skills.

He added: “Let’s be clear what we do want. We want every farmer to plant around five hectares of woodland. Mixed woodland – some broadleaf, for sequestration, some productive woodland. And if we fell within that we would be well on our way to achieving our tree planting targets.”

This week a company from London which had bought a farm with the intention of planting trees in mid-Wales indicated that they would modify their plans after a petition was set up by residents.

Foresight, which is headquartered in the Shard in London, has bought Frongoch farm in Cwrt-y-Cadno, and three other farms.

They told Nation.Cymru: “A fundamental part of Foresight’s approach to forestry is to listen to and work closely with the local community.  We’ve been doing this at Frongoch, have acted upon local concerns, and will continue to engage with the community.

“Foresight held a local community engagement meeting last night, where we listened to the locals and took their views on board. We have now made adjustments to the scheme, to accommodate the key concerns of the local farming community.

“Foresight’s forestry schemes are playing a role in both the battle against climate change and in the fight against biodiversity loss.  Importantly, at each of our Welsh sites – including Frongoch – the wide variety of commercial and non-commercial trees which we are planting will help improve biodiversity levels, we don’t plant on arable land, and at least 25% of every site will be planted with native broadleaves.”

The petition was set up by Rhiannon Lewis who lives in the area and described Cwrt-y-cadno as “an ancient area of exceptional beauty” which is “under threat of being irreversibly destroyed”.

“The good news is that Foresight have now indicated that they are prepared to listen to the local community and to adapt their plans, but we need to continue to register our opposition,” she said.

“We are asking Foresight to leave the agricultural fields for continued farming and to plant deciduous broadleaf tree species native to the British Isles in keeping with the natural landscape.”

She added that Foresight’s original plan would have “planted commercial, non-native conifers over most of the existing fields and hillside, selling off carbon credits to their financial investors for profit”.

“Such a proposed plantation would destroy productive agricultural land, both on the valley floor and on the hilltop, which has been sustainably sheep farmed for generations.”

I have heard nothing on social media about the sell-out farmers selling to the highest bidder, giving not a hoot to the local community! No wonder they virtually all vote Tory!!!!!

You could cover Wales in trees and wind turbines from one end to the other and it wouldn’t make even the slightest difference to global temps.
Anyone who believes differently is only fooling themselves.

Truly. “We need to plant 86 million trees by the end of this decade if we are to meet ‘net zero’ carbon emissions by 2050.” — Lee Waters quoted in N.C’s 2nd January article, ‘Large scale afforestation will decimate rural communities’. Which is to say, blanket afforestation to meet our own carbon credit deficit… Any one of these squares is the size required for 86 million trees with nothing else at all. I put in six so that we can all have one near home. That many more in the next 8 years (and presumably another 86 million each decade… Read more » 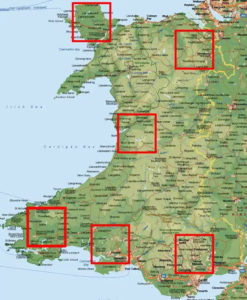 Waters isn’t promoting blanket afforestation, that’s what the Forestry Commission used to do. What he’s suggesting is that WELSH landowners lead by planting 5 hectare plots (aiming for a patchwork/network including native broadleaved woodland). Greenwashing will get us nowhere, but neither will knee jerk reactions against green initiatives. Woodlands have a part to play in much needed increasing of biodiversity on Welsh farms, and played right could go some way towards mitigating against the projected devastating effects on Welsh farmers of Brexit. Welsh rural communities depend upon sustainable rural jobs, for farmers and others working in the rural economy, and… Read more »

To enable all that the manipulators down the Bay need to be far more welcoming towards small community initiatives and less servile when approached by the large financial institutions. They are the agents of destruction as far as rural communities are concerned.

My post is hardly knee-jerk. The squares indicate how much land will be lost to existing productive use. Whether it goes in 5 ha parcels or in large plantations is immaterial. It’s still gone, and the size of Ynys Môn. For timber to be any use in sequestration, it must either continue to grow or never decompose. Neither happens. To remove its load of carbon permanently from circulation it has to be sent off planet. .For timber to be of any economical use it has to be cut down. Not much of a green mitigation of the effects of Brexit.… Read more »

“And it seems to me that there’s a feeling in Wales that Wales is being bought out from under us.”…..Vaughan Roderick nails it there…..that’s exactly what’s been happening ☹️. Plaid need to use any leverage they have as part of their deal with the Welsh labour govt. to put a stop to it. What we are witnessing at present in Wales is a 21st century Welsh equivalent of the highland clearances 😢

Once again I find myself in partial agreement with Lee Waters but finding myself underwhelmed by the whole. His grasp of the situation appears to be lacking and in the final analysis, his response is inadequate. There is some good in what he says but it appears to me that he has not listened to the serious concerns raised. I’m very disappointed with the dismissive tone he takes. Sadly, when he will be shown to be wrong the damage will have been done.

You can sign the petition referred to in this article here https://protect-eu.mimecast.com/s/WZQACXQqfZlVQc6oSU2