Native wildflowers which have been nurtured for years by a Swansea woman have been strimmed by mistake by council contractors.

Jackie Coates, of Limeslade, said she was “incensed” that the normally “flower-rich and glorious footpath” running along the back of Mumbles Cricket Club had been reduced to “a sea of green wreckage”.

A Swansea Council spokesman said the authority was as disappointed as local residents and had spoken to its contractors to avoid any repeat.

Mrs Coates said she has managed the 200m stretch of Sheepie Lane for the last four years to preserve and enhance its biodiversity.

Key to this, she said, was not strimming in late spring to allow the likes of campions, bluebells and stitchwort to bloom and also to re-seed, thereby ensuring a rich and varied growth the following year.

Mrs Coates said: “The agreement is that we manage excessive plant growth on the path until, post-flowering, the second strim of the season can safely take place.

“The council can also save money by not undertaking the first strim.”

She added: “In recent years the flowers had been making a slow but noticeable comeback. This year it has been cut before some of the flowers have even come into flower due to the late spring.”

Jackie Coates said she believed the council officer with whom the agreement had been made had left his job, but that she had spoken to another officer about it. She also said she wrote to the parks and highways department annually to ensure the arrangement continued.

Mrs Coates has complained to the council about last week’s strimming and asked what it was doing to maintain and enhance biodiversity, which is one of the organisation’s key well-being objectives.

She also claimed that she had spotted contractors in the footpath area previously in late spring and had intervened to prevent any untimely strimming.

The council spokesman said: “The council is as disappointed as local residents that this path has been cleared as it was not scheduled for cutting until mid-July.

“We have spoken with our contractors to avoid any repeat and we will look to help restore the area by putting in native wildflower plug plants which our nature conservation team will discuss with residents.

“While we have a legal duty to keep paths clear and useable, we have worked in partnership with residents at this site and we are grateful to them for their involvement and their shared commitment to biodiversity.”

So sad this has happened, Swansea Council are one of the best for maintaining and promoting native wild flowers in their many miles of grass verges. Unfortunate for this to have occured. Here in Builth Wells the council have allowed the grass fields of the Groe that runs alongside the river Wye to remain uncut. The result is a wonderful show of Buttercups and Daisies. Amazing to see. We need more Councils to follow suit to allow highway verges to remain uncut thus allowing native wild plants to flourish and form corridors to each and every town.

Would be nice to let nature flourish. Round here the biggest curse are wallies, both local and the visitor type, who think that verges and hedgerows are for dumping litter and even bigger bits of rubbish. I’d call them pigs, but pigs show more respect !

We have an ancient hedgerow which we are trying to protect but had the same issue with Ceredigion Council I was advised to put markers in to stop the random cutting.This worked but now they have yet to act now someone removed part of this hedge in preparation for a planning application. 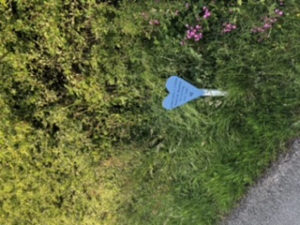 Think how much money local authorities could save by not cutting so much, or use the money to pick up litter instead.

The words you took from my mouth…cutting and chopping (down trees) the only growth industry round my way…oh! and increasing the size of holiday homes…

Sadly this doesn’t surprise me much. The Strimmer opperatives apear to recieve little or no instruction as to what to strim and what to avoid. More damage is caused to council/public trees by strimming than anything else.

It is a shame to see what’s happened, but don’t despair. We have done a lot of research into this and suggest that you ask the council to make amends by raking off the arisings from their strimming work. This will open up the sward and remove an amount of nutrient. The plants you have worked hard to establish are very likely to flower again in the next few weeks. But they won’t like having the cut material sat on them and leaving it will limit their ability to bounce back from the strimming.

Thank you – that’s really useful. I’ll probably remove it myself as can’t see the council doing it

Hello, for a beautiful woman and it is not a pity to buy a good bouquet of flowers, and if I have questions about what flowers to give then you need flower delivery west london or if you please your loved one for no reason, we have a good site for flower delivery. On this site you do not need to go to a flower shop, there is a large selection of flowers.