In a previous article, I explained why the narrative of the collapse of Labour’s ‘red wall’ at the General Election wasn’t quite all it was cracked up to be.

In this article, I will argue that, contrary to some voices that were critical of Plaid Cymru’s ‘green dam’ tactics during the 2019 General Election, it actually worked out quite well for them.

However, it also points to quite a limited, defensive focus that they will need to expand on in order to gain ground at next year’s Senedd elections.

The first point to make of course is that Westminster General Elections can be quite tough on Plaid Cymru, and in fact everyone but the two main parties.

This can be seen in the July 2019 Welsh Political Barometer Poll, which showed that there were five parties in the mix in Wales. Plaid Cymru were in 5th place on 15%, but only 9% behind the Conservatives, the frontrunners, who were on 24%.

Under this scenario Plaid Cymru, the Lib Dems and the Brexit Party all stood realistic chances of making serious gains.

The political gravity of a Westminster General Elections had reinstated two-party politics once again. 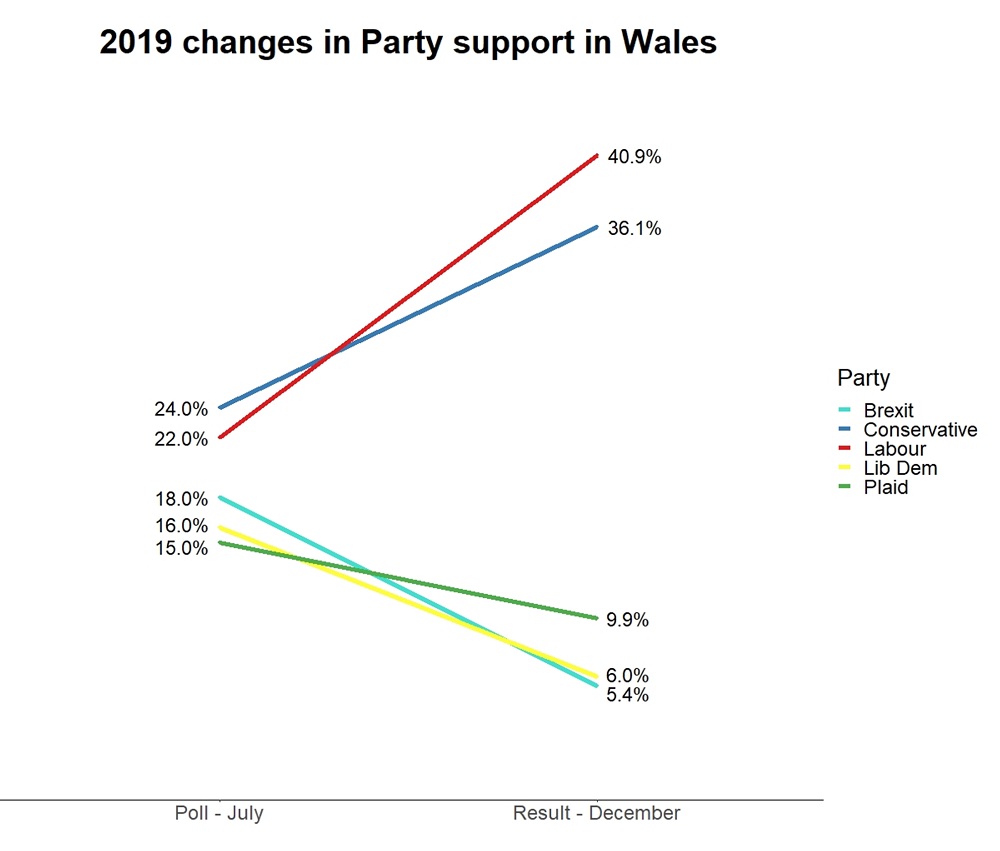 The best guide to Plaid’s general election strategy in 2019 is to look at the Remain Alliance. Daran Hill used an article on Nation.Cymru to attack the Alliance as opportunistic and built on narrow party ambitions.

But however cynical we want to be about this agreement it is important to appreciate that this election campaign was incredibly fluid: when the July poll came out Plaid and the Liberal Democrats combined vote of 31% would have put them 7% ahead of the Tories and 9% ahead of Labour in Wales.

It seemed like an earthquake was on the way. Yet, by the time the agreement was formally released expectations had dropped considerably and it was clear that the list represented two parties running quite conservative campaigns focussed on defending key seats and targeting limited new ones.

This is clear when we compare the Alliance list to the seats where the party performed well in the past, and where they spent money during recent campaigns (the data is from the electoral commission website). 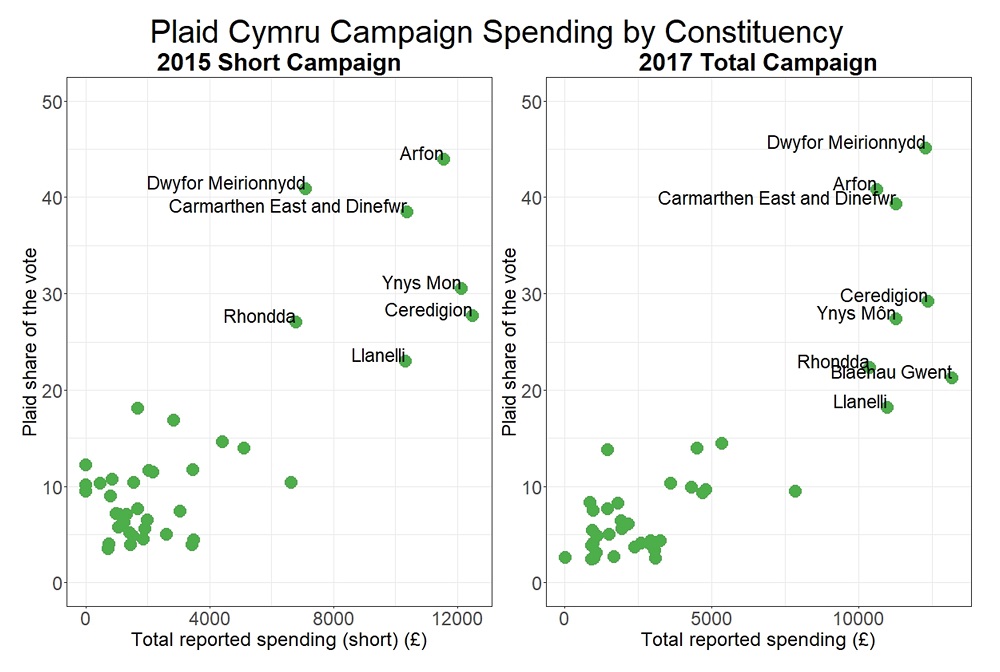 The first thing that strikes you about these plots is that Plaid are spending nowhere near the campaign limits in most seats in Wales. Whilst these plots only show spending during the campaign period and don’t show the impact of volunteer workers or national spending, Plaid clearly spend well below spending limits in over 75% of the constituencies.

These seats where Plaid spent the most money in 2015 and 2017 are very similar to their choice of Remain alliance seats. However, two valleys seats with a low percentage of remain votes, Rhondda (39% remain according to estimates) and Blaenau Gwent (38%), were replaced with two alternatives, Pontypridd (54%) and Caerphilly (45%), which were much more aligned with Plaid’s remain stance.

So how did these tactics pay off for Plaid Cymru?

If we look at Plaid’s outcomes in 2019 it’s clear that the targeting worked. As well as holding its four seats the party increased its vote percentage in all the constituencies it targeted (the seven pact seats and Ceredigion). Whether Plaid did well where it targeted, or targeted where it expected to do well is largely by the by. 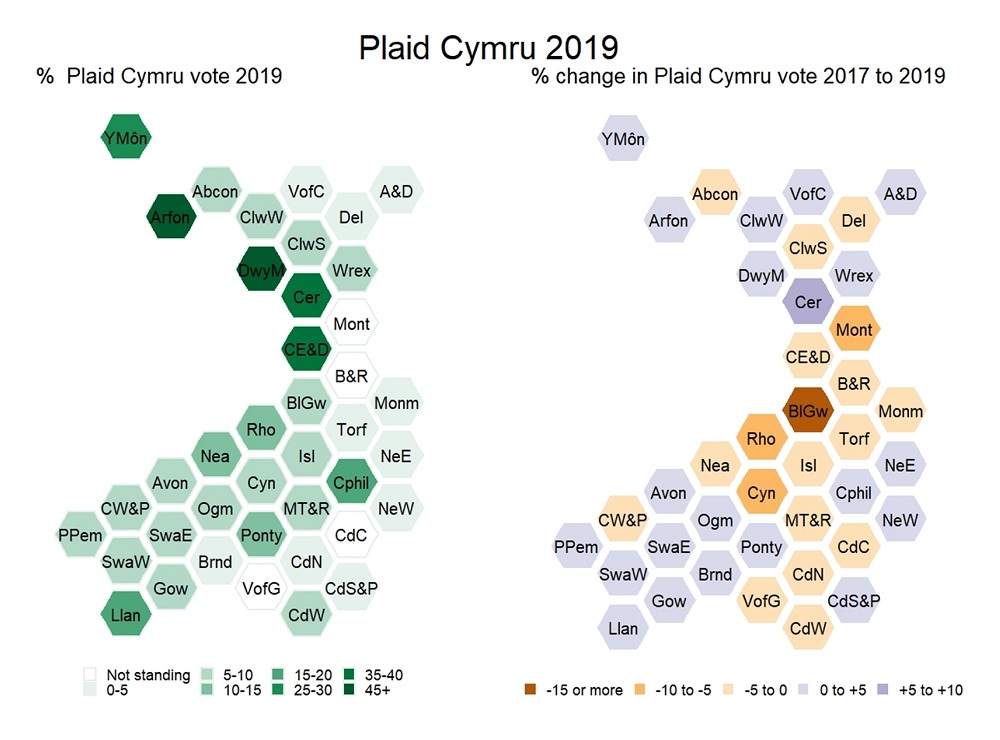 The bad news for Plaid Cymru is that outside of the targeted seats results were mixed. The party lost support in the heads of the valleys, with Blaenau Gwent seeing a loss of over 15% in the vote (hopefully spending was closer to 2015 than 2017!) and Rhondda (-8.6%) and Cynon (-5.3%) also saw quite large drops.

What will concern Plaid most is that they only got above 20% in five seats – the four seats they hold and Ynys Môn. What is more, these seats are the only five in Wales where over 40% of the population are Welsh-speaking. Plaid clearly struggle to make a mark in Westminster elections outside the Fro Gymraeg.

There is also clearly an issue with not having enough funds to spend on targeting seats outside those in which they’re already competitive. The fact is that, based on 2015 and 2017’s figures, it’s unlikely that the Party of Wales ran little more than skeleton campaigns in over three-quarters of the nation.

Fortunately for the party, boundary reform at Westminster elections and a reduction from 40 to 29 (or 32) seats will still probably mean that there will be three or four west Wales seats where the party could be competitive.

Furthermore, given the party machine’s success in targeting these seats, there is no reason to believe that Plaid will not retain its dominance in the Fro.

However, if the party hopes for more, then it will need to change the narrative of Welsh politics, and the most obvious way to do that would be to achieve a breakthrough in next year’s Senedd election.

Without that we can be pretty sure that the next UK General election (May 2024?) will see Plaid fight the same campaign with the same limited west Wales targets that it has done since the 1970s.

Breaking out beyond the ‘Green dam’ at Westminster is completely dependent on repeating the SNP success of winning a devolved election.

Whether it has the funds – or the appeal beyond the Fro Gymraeg – to pull that off is another matter.

Appealing beyond Y Fro Gymraeg will cause populism as seen in West Caerdydd.

The answer is to expand Y Fro Gymraeg, to imitate the revival of Hebrew in Israel.

You win the language you win the country. Otherwise, you might as well join Labour.

Speaking one’s own language should not dictate whether one should vote for one party or another. Australia and New Zealand speak the English language but they are independent, they run their own affairs and their own trade alliances. It is not imagible that the UK runs the English speaking USA – In real terms it is the USA deciding UK policy particularly in defence and the economy (more so since Brexit). Plaid Cymru should focus on Welsh autonomy. For example: Why we are poorer than Romania and Bulgaria? Why we have no control of criminal justice in our own country?… Read more »

Why bother voting Plaid?
Just vote Labour and cut out the ‘middle man’.

The relationship between spending and votes is not a simple one as parties generally put most resources into target seats. In the case of Y Rhondda in GE2017 Plaid spent more trying to build on Leanne Wood’s success in the 2016 Senedd election and unseat Labour’s MP Chris Bryant. It will be interesting to see the Electoral Commissions spending figures for GE2019 because Plaid’s vote share fell again and Branwen Cennard slipped into 3rd place behind the Tories. But what would be more interesting is a breakdown of what was spent, what voters gleaned from different forms of communication and… Read more »

How do you figure that the election tactics worked when they made zero gains? The self described “election winning machine” won nothing. The “New Wales” narrative was totally lacking in substance

Seems to me that at December’s general election Plaid didn’t lose – indeed, they consolidated their position in the Fro Gymraeg seats which they already hold – but they didn’t make any further real progress; in not one of the seats they failed to win were they even the runner-up. Doubtless they’ll perform better at next year’s Senedd election because there’ll be voters who see no point in voting Plaid at a Westminster election but are more inclined to back them for Welsh elections; until recently, when I finally despaired of Westminster, I was myself one such. But it’s still… Read more »