The Chairman of Chester FC football club has said that they have become a “political football” over whether Welsh Covid restrictions should apply to their stadium, which has its stands and pitch in Wales.

Andy Morris however confirmed that they had accepted a Covid grant from Flintshire County Council in order to support the stadium’s bars.

But he said that because they were registered in England but much of the stadium was in Wales they were “getting the worst of both worlds”.

Speaking on Radio Wales, he was asked why they accepted a Covid business support grant from Flintshire Council.  The presenter asked: “Some might say Andy that by accepting that money from Wales when it was offered, that’s where your argument falls down?”

Andy Morris replied: “Yes that was a UK national support for the hospitality sector, it was nothing to do from the footballing side of things. So because our bar areas are in Wales they are licensed by Flintshire Council, it is Flintshire who administrated that funding support.

“That’s why we went through Flintshire for that, because we couldn’t go through Cheshire, because of the alcohol license, because we operate a bar as many clubs do.”

He added that it was “not about what happens in the stadium, it’s about access to the stadium. If he [Mark Drakeford] ever does come to Chester’s ground, there is one road in and one road out, and it runs through Chester. That’s the only way to get in and out.”

He however expressed annoyance that while “a lot of people see this for what it is” a number of politicians were commenting on the issue of the club on social media and elsewhere without contacting them in order to ascertain the details.

“What I’ve found difficult is that I’ve seen a number of politicians commenting both negative and for the club both on social media and press releases,” he said.

“Nobody’s come and spoke to us. The only conversation we’ve had is two officers. One from Flintshire Constabulary and one from Flintshire Council. So I’m surprised that all these people seem able to give informed opinions, when actually we haven’t had any dialogue to see our position, where we stand, and how we can work collaboratively to resolve these issues.”

He added: “This isn’t about English or Welsh and if we’re classified as Welsh, that’s what we have to deal with,” he said. “What we don’t like is that we’re two years almost into this pandemic now – why is this being raised as an issue?

The dispute began after North Wales Police and Flintshire County Council said they were working to “investigate” the club to find out if matches played at its ground on 28 December and 2 January broke the Welsh Government’s coronavirus regulations.

The club’s Deva Stadium home is on the Sealand Road Industrial Estate and lies on the Welsh side of the border with England. This border runs along the back of the East Stand with the pitch and as well as four stands lying in Flintshire.

Under Welsh Covid restrictions professional sports have to be played behind closed doors. Chester FC has been given until 11 January to respond to North Wales Police about whether it intends to still allow fans in for the next home game on Saturday.

Earlier today the First Minister Mark Drakeford said that a “sensible, pragmatic solution” will be found to the dispute regarding whether Welsh Covid restrictions apply to Chester FC.

Speaking on Sky News, Mark Drakeford said: “I’ve already asked my senior officials to have discussions today with the club, with the police, with the local authority that owns the ground, the Chester local authority.

“I’m sure there is a sensible pragmatic solution here that doesn’t mean the club is placed in jeopardy and that doesn’t result in the law being broken either.”

Chester FC said they had previously followed English coronavirus rules and guidance until now and can’t understand why that has changed.

“I think it’s ridiculous. We seem to be played around maybe as a political football all of a sudden,” said Jeff Banks, director of fan engagement at Chester FC.

“I think common sense just has to be used here.

As a Cardiff City fan, I wonder if the First Minster is planning on traveling to Anfield to support his team in the next round of the FA Cup. If he is, he could travel through Chester and break bread with Andy Morris.

Like getting £25,000 to bail out the club during the Covid lockdown was “the worst of both worlds”. Total stupidity

“the pitch is in Wales” – which part of this is so hard to understand?

Many businesses are headquartered in England (or Germany, or USA) and have premises in Cymru, in which the laws of Cymru apply. Why is a football club any different?

“Waah we are being treated by like a political football” No, you took Welsh taxpayers money and broke our covid laws that all other clubs situated in Wales have adhered to. Chester know their ground is in Wales and went ahead with it without consulting anyone here so they only have themselves to blame.

“English Exceptionalism”
….We can’t have that in Cymru anymore. If I went to England and broke an English law or regulation I would be dealt with according to the English law. It has to be the same in Cymru.

This is a prime example of english exceptionalism, the ground is in Wales therefore comes under Welsh jurisdiction,

The Chester FC situation is starting to remind me of that time everyone was talking about scotch eggs.

It’s a daft situation and the football club don’t have a leg to stand on here. But it’s a useful distraction from the bigger issues.

Why are triple jabbed people with covid passes not allowed to attend outdoor events in Wales? This rule is stupid, but for some reason it only seems to be a problem in Chester.

The Welsh taxpayer does. We are subsidising them and they think they should be treated differently to every other club situated in Wales who are following our laws.

Note that the first reaction of the Tory SoS for Wales was to lie. The football club taking Welsh money and reacting to restrictions are minor issues. It is the knee-jerk reaction of Tories to lie that should be of real concern. Johnson is having a terrible influence of what was already a shabby party.

More holes in Andy Morris’ statement than a poundshop string vest,
The Pitch, Spectator areas and bars are on the Welsh side of the Border so
WG rules apply, ‘nuff said

wasn’t there a similar rumpus about Llanymynech Golf Club not so long ago? (pic shows bilingual memorial on English side of border) 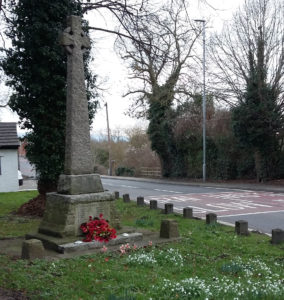 If Chester get an opt out and are allowed to have fans, then surely that would mean that the Welsh clubs, the Welsh rugby regions, the FAW & WRU could take legal action against the Welsh Government?? These restrictions are not neccesary.

I feel like people are spending a lot of time asking about whether Chester should follow the rules, but I rarely see people actually questioning the rules themselves.

Still waiting to hear why 51 triple jabbed people watching a football match outdoors is dangerous. It makes no sense.

I have been watching a lot of European football this weekend and most countries are playing behind closed doors. We aren’t some special case where its only our government doing this.

I appreciate why Barcelona and Bayern Munich are playing behind closed doors, because their stadiums are huge, but Scottish league 2 is going ahead with crowds because they get less than 500 people.

Wales is an outlier for quite how strict we are on outdoor gatherings. I see no reason why Cymru leagues teams can’t have fans.

Many European countries have implemented some real draconian measures, look at the protests that have come as a result. The Netherlands in total lockdown for almost a month. Is this really necessary when the vaccine is freely available?
In Scotland, Nicola Sturgeon whilst not offering any promises has at least given some optimism that matches could be played at Murrayfield in time for the Six Nations. Yet all we get in Wales is uncertainty.