Wales fans have certainly been making an impression on all and sundry in Belgium.

Basing themselves in a square in Brussels outside Irish bar O’Reillys ahead of the Nations League clash, the Wales fans enjoyed quite the party, so much so they smashed the record for bar takings at the pub, which has been open for 25 years in the centre of the Belgian capital.

Apparently the previous record has stood since 2014 when Tottenham fans were in the city for a European tie against Anderlecht.

Of course, we don’t condone binge drinking here at Nation Cymru, but our thoughts and prayers are with the hangovers of Welsh fans making their way back home after last night’s Nations League match.

We also cannot confirm or deny that the owner of O’Reillys was today seen driving around the city in a brand new Lamborghini.

We may have lost on the pitch yesterday- however we won off it #walesaway fans broke the 25 year record for @oreillysbrussel bar takings in one day, record held by @SpursOfficial since 2014 🏴󠁧󠁢󠁷󠁬󠁳󠁿🏴󠁧󠁢󠁷󠁬󠁳󠁿🏴󠁧󠁢󠁷󠁬󠁳󠁿🏴󠁧󠁢󠁷󠁬󠁳󠁿💪🍺🍺🍺🍺🍺 pic.twitter.com/7wOTiypoIt

The massed ranks of the Red Wall have been making friends in Brussels over the last couple of days and last night they received praise from a Belgian newspaper and local police after clearing away any mess that had been made after partying in the centre of Brussels.

Fans cleaned up the square where they had been singing and partying long into the night.

Wales fans have an enviable reputation wherever they go and once again showed why they are some of the best fans in the world by mounting a clean up operation before heading off to the Nations League match.

Belgian newspaper Le Soir reported on the good behaviour of the Wales Away contingent, writing: ‘Wales supporters will leave a positive image of them in Belgium. 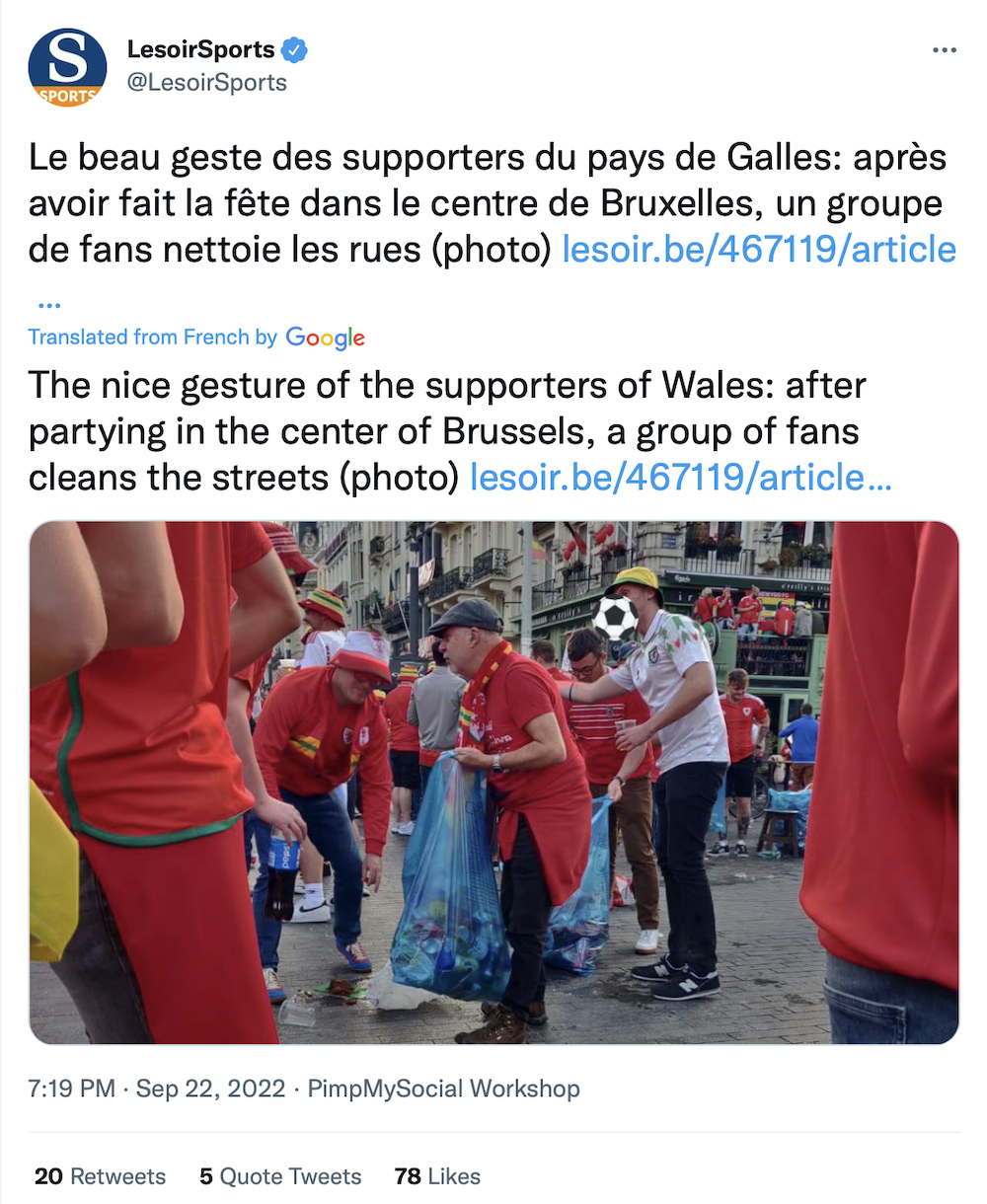 ‘Gathered in the centre of Brussels a few hours before the start of the Nations League match between their team and the Red Devils, the Welsh fans celebrated during the afternoon, before taking the time to collect their waste, equipped with garbage bags, in order to leave the area clean.

The gesture was highlighted by the Brussels-Ixelles Police Zone on social media.

The tweet translated as: ‘It is not uncommon to meet supporters before a football match of our Red Devils in the city centre of #Bruxelles. We would like to thank the supporters of the opposing team @Cymru #Wales for leaving the place as they found it before: “clean”. #BELWAL

Win or lose, I’m proud of our team and supporters.

Great to see Wales fans praised by the Belgian police & mayor for their good nature and for cleaning up after themselves. 👏,🏴󠁧󠁢󠁷󠁬󠁳󠁿

I disagree with this stat being promoted as a good thing, especially when reports of small number of fans throwing beer cups from top tier to bottom tier.

Wales away is for everyone including those who don’t drink. Like I said, it was only a small number but we can always do better.