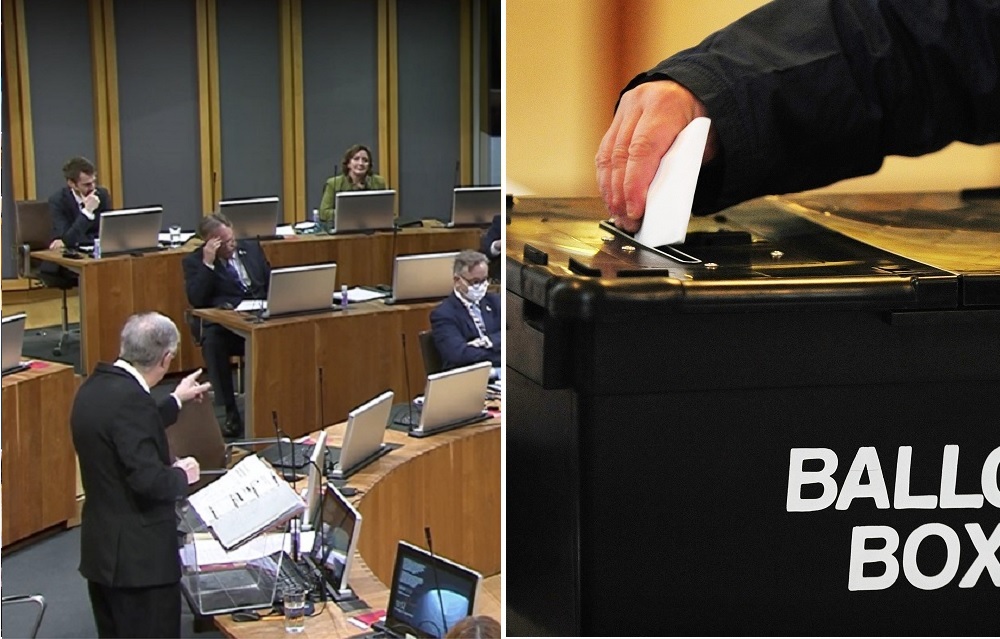 A “huge improvement” but one that would still be considered “undemocratic” in some countries – Senedd reform plans have won mixed reviews from international experts in election systems.

Amid increasing controversy over the move to a system based on closed proportional lists, Nation.Cymru asked experts from six countries using different systems for their perspective on the plans.

Some praised them for striking a balance between proportionality and accountability, while others warned the system would hand too much power to political parties.

Wales would be among the majority of countries in the world to use a closed list proportional system but in a minority in Europe – just four of the 27 EU member states use that system for their national elections.

“It’s not an uncommon system but it’s not a system that’s popular for countries which go into electoral reform nowadays or over the last few decades,” explained Dr Gert-Jan Put of Leuven university in Flanders.

“Most countries move towards some kind of open variant of the list PR system.”

Catalonia and Spain are among those that do use closed lists. “An important consequence in Spain is that candidates are quite irrelevant, while party ID and ideology play a crucial role,” explained professor Ignacio Lago Peñas of Pompeu Fabra University in Barcelona.

“Party structures become crucial as they decide the order of candidates and therefore who is elected.”

By contrast, “open list makes candidates more accountable to voters”, according to professor Åsa von Schoultz of the University of Helsinki. “The system gives the opportunity to voters to decide both which parties and individual politicians that will represent them.

“To remove power from voters and hand over the control to parties would be very difficult for Finnish voters to accept. Many Finns consider a closed list undemocratic.”

Although she added that “open lists have been associated with clientelistic relationships between voters and politicians” in countries with “weaker parties and a less solid democratic heritage.”

That won’t ease the fears of those who believe closed lists would “concentrate power in the hands of a few party managers”, as suggested by Conservative Wales Office Minister David Davies.

That view is shared by the Liberal Democrats and the Electoral Reform Society, who say open lists are “undeniably more democratic than a system in which who is elected is determined by their placement on a list created by party leaderships.” 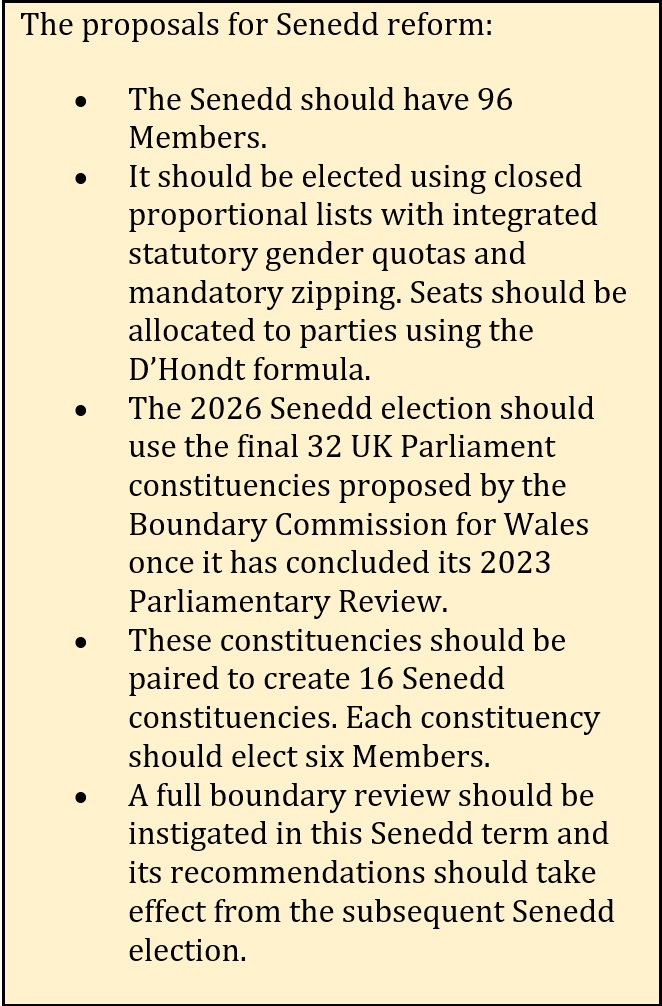 But Thomas Gschwend, a professor of politics at Mannheim University in Germany, where closed lists are also used, said top-down control isn’t inherent in the system.

“The crucial question is who is making up those lists,” he said. “Is it the central party headquarters or the local branches? It would be much better if candidates are nominated locally in those constituencies – MPs will still be responsive to their local constituency. If this is the case, then I like this proposal.”

That link was cited as the primary reason for opposing the reforms by Rhondda Labour MP Chris Bryant, who said they “will make MSs much less connected to local people.”

Professor Ben Reilly of the University of Western Australia, who co-wrote the book on electoral system design for the Swedish-based Institute for Democracy and Electoral Assistance, agreed “voters will obviously not have the same limited geographical district or closeness to a local member.”

The trade-off under proportional representation is that they will have “a representative who they feel closer to politically instead,” he said. And Reilly added that the choice of six members in each of the 16 constituencies was the proven “sweet spot”.

That’s in contrast to Flanders where constituencies have as many as 32 members. “If you ask me or any voter from my district, who is representing you and how are they defending your interests, that’s very difficult to answer,” said Dr Put.

“The Welsh proposal is a nice number. It’s a nice trade-off between proportionality but also having some kind of geographical representation and accountability.”

Many believe the best way to reconcile those factors is through the single transferable vote system, used in Ireland and Malta, which sees voters list individual candidates in order of preference.

However, a majority on the Senedd committee set-up to consider reforms expressed concern that “voting by ranked preferences was an unfamiliar system in Wales and that the method of translating votes into seats would be seen as complex and difficult to explain.”

Professor Gail McElroy of Trinity College Dublin dismissed that concern, saying: “Voters don’t need to know the ins and outs of it. The notion that voters aren’t up to it…it’s not that Irish voters are inherently brighter than Welsh voters. It’s been working fine here for the best part of a century.”

Ireland has twice voted no in referendums on electoral reform. “Voters love STV,” said McElroy. “It does give voters a huge degree of power over who gets elected.”

That has contributed to preventing the rise of the far-right in Ireland and assisted independent candidates, she said. “This ability to elect independents, you could argue, is a safety valve. It allows people to express a protest vote, that anti party vote, without it causing chaos.”

But she added that “closed list PR has a lot to be said for it” and would be a “huge improvement from first past the post.”

A more representative parliament would be a key benefit of using closed lists, according to Gschwend. The proposals already include a legal obligation for parties to have a gender balanced list and he said they would also help people from minority backgrounds to get elected.

“Minorities have a harder time if you vote for one particular candidate,” he said. “You have a much better chance of getting minorities in parliament if you place them on a party list.

“Most people believe that if a parliament is more diverse, it makes better decisions.”

Plaid Cymru “say” they are for the EU, BUT they want to be classed in the MINORITY of the countries who use the closed lists in their national elections. Why?

Because this reform is a stepping stone.
Increase the number on MSs so we have enough representatives for the Senedd to do its job properly.
Whilst also scrapping the FPTP section and extending the current PR system to every MS election. (A marked improvement)

A future step would be to change the PR system to STV.

This reform is an evolution not a revolution of voting system.

Unfortunately if they say no to closed lists there is a danger that Labour will seek to install 32 three member constituencies using FPTP. Which I have no doubt the Tories would vote for, therefore installing the British establishment Duopoly into the Senedd. I don’t like closed lists, but as was pointed out by a German academic in this article they’re not as bad if local party officers select list candidates as oppose to National party managers. Better still if it is local party members voting on who makes it on to the list and it what position. Overall I… Read more »

Agree. Can’t see Gwynfor or the founders who loved community, bottom up and community focused outcomes liking this party stitch up.

The closed list system is appallingly undemocratic, handing representation to political parties. The single transferable vote system gives power to the electorate and should be adopted with or without enlargement of the Senedd.

I notice that the 2 European countries using STV, Ireland and Malta, are both former British colonies. This means there is a wealth of expertise about the detailed workings of STV available in the English language, very accessible to Wales. The main problem with the closed-list system is that party bosses in Cardiff might select who goes on every list, severely reducing local democracy. We could counteract that danger by adopting the American system of party primaries, where local party members vote on who should go on the party ticket for the subsequent general Senedd election.

The closed party list that is currently in use on the regional list is decided by party members. So this new system would work in the same way as the current regional list MSs.

I’m all for electoral reform, but closed lists and mandatory gender quotas are almost as bad as FPTP

Why do some men have a problem with gender quotas?! Could it be because they feel threatened by women in positions of power? 🤔😉😂 Some men need to grow up and realise that women make up half or more of the population. Therefore they’re entitled to as much representation as we males have and if you won’t vote for female candidates then gender quotas are the only way to ensure that. For the record, before anyone quotes the “candidates should win on their own merit” argument, that’s complete nonsense. Men mainly select the candidates and some men refuse to vote… Read more »

Of course women are entitled to the same representation as men, but quotas are sexist, and I think you will find that there are plenty of women who are opposed to them as well. Are you telling me that if Priti Patel became Tory leader those chauvinistic men would refuse to vote for her because she is a woman, instead would go for Starmer? Some people might even say that your view of men is sexist. There is no such thing as positive discrimination. Discrimination is discrimination, period! I vote for whoever candidate represents my views, whether or not they… Read more »

Is this the end of the reforming journey? Saying no to voting reform in Westminster referendum was the end of that journey, but saying yes surely doesn’t mean this is the destination point.

Plan is to change it again for the following election.

I see this as a step in the right direction. The existing system was designed to ensure a majority for labour in Cymru, which it was successful, and no overall majority in Scotland, which it failed.
Once this is in use the Senydd can decide if it needs modification. The reality is at present, we vote for the party, or whoever is the party leader.

It’s an improvement, but mainly in ensuring the Senedd can scrutinise the Executive and Legislation. Also the gender quotas are very good. However, the choice of closed lists is designed to ensure the continuation of Labour dominance and deny a fourth, or more, party(s) from gaining significant numbers of seats as and when voters become dissatisfied with both Labour and Plaid Cymru.

Good read, very interesting (and important) to hear different perspectives. Personally, I’d like Wales to have a place around the table with the Finlands and Icelands of this world. I hope is that this is the start of such things.

“the experts” hahah.
just like the experts who said banning parkrun and stopping kids goingnto school was a good idea.

Do We the People get a say in this? Should at least be a Referendum. Really though, we need to call a Convention to rewrite the whole way Wales is governed – by the people for the people. Not by and for political parties